All Souls' Day for the Sułkowskis 2012 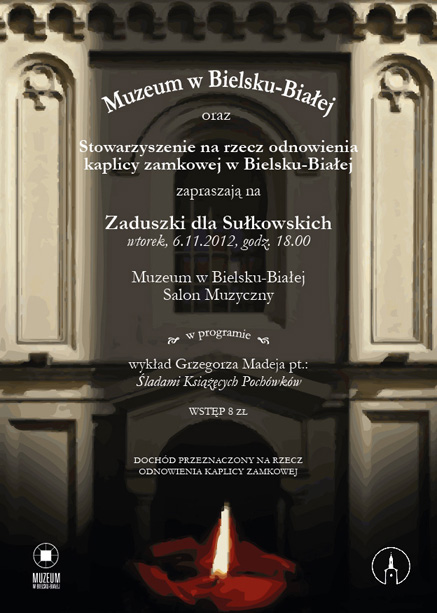 On the 6th of November 2012 we have organized the second edition of the All Souls' Day for the Sulkowskis. This time it had a more educational character. Those interested in a lecture “Following the Traces of Ducal Burials” by Grzegorz Madej gathered in the Music Hall in the Museum in Bielsko. The lecture was a summary of three research trips following the traces of the Sulkowskis family in the Grater Poland, Austria, and Slovenia, and summary of recently gathered information abut the burials in the Castle Chapel.
As always money from the tickets were earmarked for the chapel.

Before the 1st of November 2012 Museum in Bielsko-Biała installed an information board on the Chapel’s wall about the representatives of the Sulkowskis family buried in the Chapel’s crypts.

Like last year flowers and candles were placed in front of the Chapel. 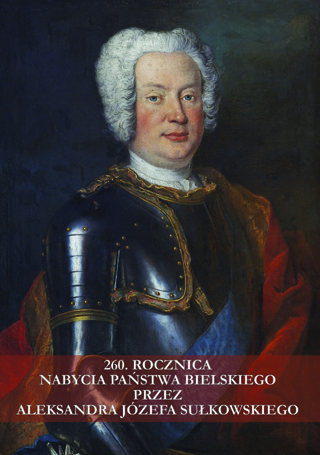 On the 13th of October 2012 at 10:00 a ceremonial mass took place in the St. Nicolas’ Cathedral in Bielsko-Biała concelebrated by the bishop Tadeusz Rakoczy, the ordinary of the Bielsko-Żywiec diocese, and the cathedral’s rector father prelate Zbigniew Powada, the director of the Diocese Museum father Grzegorz Klaja, the director of the Museum of John Paul’s II Family Home father Paweł Danek, and the rector of the St. Stanisław’s parish in the Old Bielsko father Zygmunt Siemianowski. Musical setting was prepared by the choir of the University in Bielsko-Biała conducted by Jan Borowski.
The descendants of the duke Aleksander Józef Sulkowski, the heir duke Alelsander Józef Sułkowski and the representative of the Hungarian line Hubertus Sulkowski, took part in the celebrations. 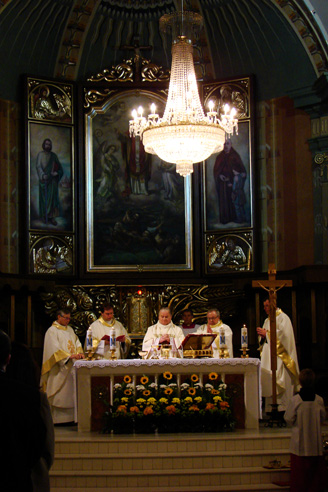 After the mass guests came to the Museum where they visited the Castle Chapel, and saw an artistic reenactment of signing the conveyance of the State of Bielsko on the 1st of July 1752 on the basis of the original document from that time, played by actors from the Polski Theater in Bielsko-Biała. Then there was a concert of 18th century songs performed by Diana Pradella and Wojciech Bergander accompanied by Zuzanna Pradella on the piano, and opening of the exhibition organized on the occasion of the 260th anniversary of purchasing the State of Bielsko by Aleksander Józef Sulkowski connected with giving the Gallery of Temporary Exhibitions his name.
The exhibition presents a ciborium founded by the duke Aleksander Józef Sulkowski and photocopies of the document from 1752 relating the official conveying of Bielsko’s goods, and prints connected with this occasion. The exhibition will be opened until 28th of February 2013.


The Black Madonna of Częstochowa in the Cathedral of St. Nicholas in Bielsko-Biała

One of the permanent traces of the connection of the Sulkowskis family with Bielsko is a copy of an image of the Black Madonna of Częstochowa held in the Marian Chapel in the local cathedral. The picture was brought by count Theodore Sulkowski, who in the years 1780-1786, left Hungarian territory and settled in the Bielsko’s castle. When the estate was taken over by the duke Franciszek Sulkowski, he settled in the town where he died in 1792. After Theodore’s death the picture of the Madonna was moved to the chapel by the St. Nicolas Cathedral, where the Bielsko’s Marian image, famous for its graces, survived two fires, as we can read in the parish’s inventory which was written in 1835 by a father Matthäus Oppolsky. 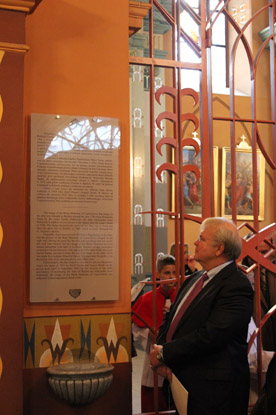 The picture was painted by an unknown artist and it is a faithful copy of an image of the Black Madonna of Częstochowa (Diva Claromontana), which represents a type of Byzantine iconography Hodegetria, that is the Most Holly Virgin Mary showing the way to salvation. In the period from April to September 2012 the picture was subjected to preservation works, which revealed that the picture was also preserved in 1954 by the Bielsko’s artist Stanisław Szpineter and was modified, especially its maphorion and background. Stylistic elements such as putti and floral motifs on the Mary’s coat visible on the X-rays pictures define the painting as baroque, created in the circle of the 18th century guild workshops in Częstochowa. The present, silver frame of the picture was created in 1954 by August Dyrda and Józef Potępa. It was made on the occasion of the 100th anniversary of the creation of the Dogma of the Immaculate Conception. Silver and gold crowns as well as votive heart-shaped tamas were probably made and placed on the picture around the second half of the 19th century. It is possible that they were also connected with the above mentioned creation of the Dogma. The present preservation was made thanks to the social initiative for the occasion of the 260th anniversary of purchasing the State of Bielsko by Aleksander Józef Sulkowski, and it is carried out in the Art Preservation Department in the Silesian Museum supervised by Anna Ucieklak. Thanks to this actions the Bielsko’s cathedral will be able to share this historical image of the Virgin Mary, in which we were able to restrain the inevitable flow of time, for the next few decades.


Preservation of the painting of the Black Madonna of Częstochowa from the Cathedral of St. Nicholas in Bielsko-Biała

In May the Association engaged itself into an idea of preservation of the picture of the Black Madonna of Częstochowa in the Marian Chapel of the Cathedral of St. Nicholas in Bielsko-Biała. Conservation of this work is a part of celebrations of the 260th Anniversary of purchasing the State of Bielsko by Alexander Joseph Sułkowski.
The painting is a legacy after colonel Theodore Sułkowski, who brought it from Tokaj in Hunagary. This cousin of the Bielsko’s Sułkowskis family (nephew of Alexander Joseph Sułkowski), was a probable father of Joseph Sułkowski, an aide-de-camp of Napoleon. After he left the Hungarian area he lived in the Bielsko’s castle in the years 1780-1786, then after the estate was taken over by Franciszek, he moved to the town where he died in 1792.

And this is what we know about the painting from the inventory written in 1835 by Matthäus Oppolsky:
The altar of the today’s Marian Chapel presented flagellation of Christ. The whole altar was black with gilded ornaments. The painting of the Black Madonna of Częstochowa, which now is on the altar, used to hang on the left wall. During a fire of the church an unbelievable thing happened with the painting, which Bielsko and I have witnessed: the altar with flagellation burned together with the painting on the left wall, but the painting of the Black Madonna survived the fire almost untouched with a half of it’s frame. Glass of the frame deflected outwards because of the fire heat but it did not melt or fell out from the frame.
This almost miraculous circumstance induced parishioners, with permission of a dean Wojciech Hanke, to move the painting to the altar.
The painting comes from Tokaj in Hungary. During a fire in there, count Leopold Sułkowski took it from his apartment and put it in a wine cellar on a barrel. The cellar burned entirely, but the painting survived together with the barrel. The count brought the painting with him to Bielsko, he favoured the painting and in the end was found dead kneeling in front of it. 83 years old Johanna Alscher, a receiver’s widow, who lived with the count in one house and heard the story of the painting many times, was the first one, after the count’s funeral, to arrange for the painting to be brought to the church and hung in the then chapel of flagellation of Christ on the right-side wall. (trans. Piotr Kenig)

The painting is being renovated for a week now in the Silesian Museum in Katowice which has a professional preservation workshop. Works on the painting should end in September in order to be ready and hung in the cathedral for the main ceremony connected with the 260th Anniversary of purchasing the State of Bielsko by Alexander Joseph Sułkowski.
Main celebration will take place on the 13th of October 2012 (Saturday). It will start with a mass in the cathedral at 10 o’clock, performed by an ordinary of the Bielsko-Żywiec Diocese, bishop Tadeusz Rakoczy.
Then an exhibition will be open in the Museum in Bielsko-Biała devoted to the anniversary.

At present we are focused on collecting some founds which would cover the costs of preservation works. Those who would like to financially support the undertaking can donate money to the Association’s account:
BANK MILLENNIUM S.A. 70 1160 2202 0000 0001 9494 6167
with annotation: NA KONSERWACJĘ CZĘSTOCHOWSKIEJ 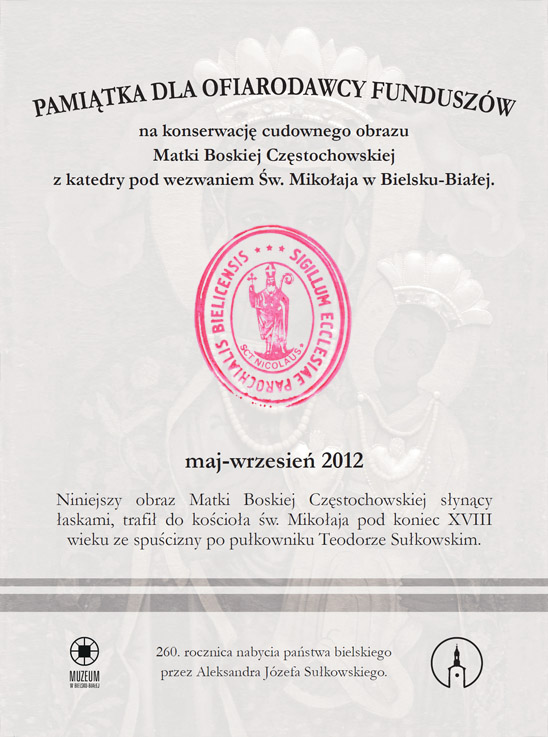 On the year 2012 falls the 260th anniversary of purchasing the State of Bielsko by Alexander Joseph Sułkowski (1695-1762), the later Duke of Bielsko. In order to commemorate this occasion Museum in Bielsko-Biała in cooperation with the Association for the Benefit of Renovation of the Castle Chapel in Bielsko-Biała prepared some events.
14th April 2012 – the Castle Chapel – charity concert on marimba and vibraphone, for the benefit of the chapel’s renovation, performed by Daniel Pradella.
The program includes compositions of: J. S. Bach, N. Rosauro, M.Peters, K. Garrett, and R. Galliano.
Guest artists: Sara Pradella – saksophone and Wojciech Bergander – double bass.
Time: 17:00
Tickets: 15,00 PLN
Income form this event is intended for the benefit of the restoration of the Chapel.
Attention: Limited sitting! Photostory from All Souls' Day for the Sułkowskis

All Souls' Day for the Sułkowskis 2011

Museum in Bielsko-Biała and the Association for the Benefit of Renovation of the Castle Chapel in Bielsko-Biała would like to invite on the 15th of November 2011 (Tuesday), at 17.00 to the Castle Chapel for the All Souls' Day for the Sułkowskis.
In the program: songs of Leonard Cohen performed by actors from the Polski Theater in Bielsko-Biała: Marta Sawicka, Rafał Sawicki i Krzysztof Maciejowski. For the first time since the funeral of Maria Teresa Sułkowska on the 17th of September 1940, there will be the All Souls’ Day celebration in the chapel. It is a historic event during which we will light candles above the family’s crypts for the first time after a half of the century. This concert is a second event in the chapel initiated in order to focus people’s attention on the history of Bielsko’s line of the Sułkowski family.
Income form this event, as from the previous one, is intended for the benefit of the restoration of the chapel. 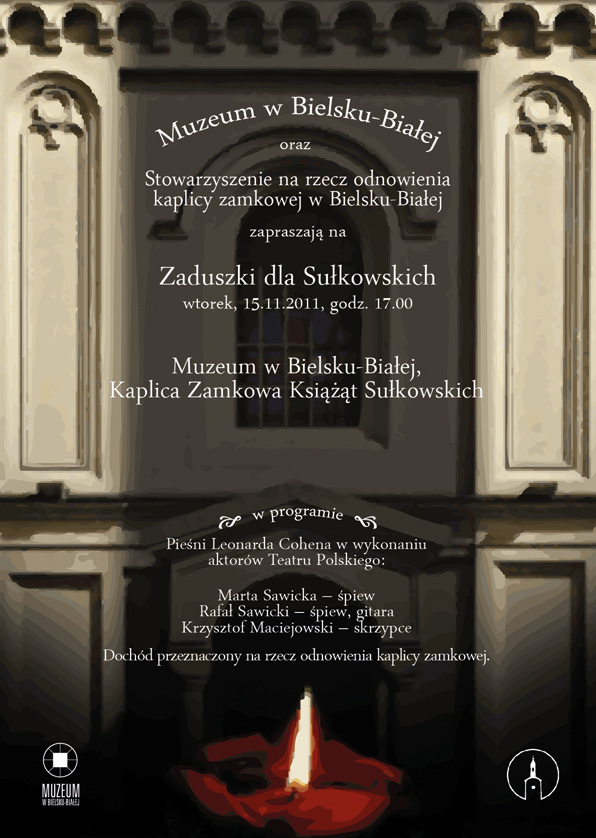 Photostory from 156th anniversary of the consecration of the castle's chapel

The High Mass on the occasion of the 156th anniversary of the consecration of the St. Anna’s chapel

The Association for the Benefit of Renovation of the Castle Chapel in Bielsko-Biała and the museum in Bielsko-Biała would like to invite you on the 25th of September 2011 (Sunday) at 12:00 o’clock, in front of the castle chapel to the High Mass on the occasion of the 156th anniversary of the consecration of the St. Anna’s chapel (17th September 1855) inaugurating the activity of the Association. After the mass there will be an outdoor concert.
The celebration has the patronage of:
bishop Tadeusz Rakoczy, ordinary of Bielsko-Żywiec diocese
bishop Paweł Anweiler, head of the Cieszyn diocese of the Evangelical Church of the Augsburg Confession in Poland
Mr. Jacek Krywult, major of Bielsko-Biała